Chapias, situated approx. 3km from Labeaume, is a small village with four important sights which have formed its history : (1) The Sevenier Mansion (2) The Cave of the Priest (3) The church and (4) The tower

The name Chapias is said to have been derived from the name of the proprietor of the gallo-roman domain which once occupied the place where now stands the Sevenier Mansion. Adding the suffix accum meaning house or property of to his name the domaine was called Chapiacum.

In Chapias you can also visit a number of prehistorical sights as well as dolmens (megalithic burial chambers) and the remains of a gallo-roman villa.

The clergymen Sevenier at the time of the revolution

Let us turn to the 18th century, at the end of the ancien regime, the time of the two clergymen Sevenier. Both of them, uncle and nephew, were born in Chapias at their family mansion, the uncle in 1733 and his nephew on the 7th of mai 1760. When the revolution broke out, they were living at Valgorge where they continued to exercise their duties till they were forced to hide in order to escape arrestation or worse. They were hidden by their parishioners and notably by a certain Jacques Nicolas CHAMBON. But feelning that their lives were threatened and that their presence endangered the people who had helped them they were forced to leave Valgorge and seek refuge at Chapias. Thus they were added to the list of unauthorized priests and enemies of the revolution. The Seveniers had large landed properties and were often obliged to engage farm hands from outside Chapias. But in those troubled times nobody could be trusted, particularly since the revolutionaries offered large rewards. In consequence a number of precautions had to be taken to ensure the safety of the clergymen and of the people helpling them. Thus it was decided that the two Seveniers were to hide in a small cave at about four hundred meters from the mansion. In case of need communication was possible between the house and the cave by a number of signals. A small hole in the rock allowed the discreet supply of food even under the eyes of possible spies. 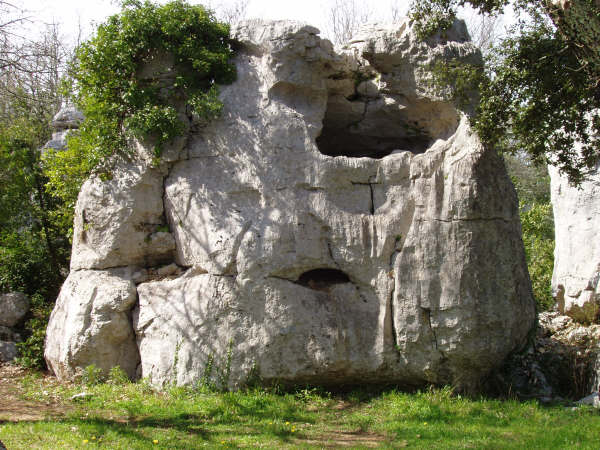 One morning soldiers entered the house without warning, just when Madame Seveniers was sitting by the fire with her nephew, the curate. The lady had the presence of mind to hand her nephew a sack saying: « Now take your food and go and mind the sheep. » The soldiers let the supposed shepherd pass without a second glance. The search of the house proved fruitless but the Seveniers were quite aware that they had escaped by a hair´s breadth. Some time later when the two clergymen had come to the house to seek refuge from bad weather and were asleep in bed, they were betrayed by a shepherd. In the middle of the night the soldiers knocked at the dooor awakening the household with a start. While Pierre Sevenier went to open the door, his wife hid the the two clerics behind the wardrobe and emptied a bucket of dirty water in front of it, after which she lay down on the clergymen´s bed. The soldiers entered and searched the whole house whithout finding anything. They stuck a bayonet under the wardrobe to check if anything or anyone was hidden there, but they did not bend down to look because of the dirty water. The bayonet merely brushed the uncle´s clothes lightly and the soldiers had to leave again without having had any success. 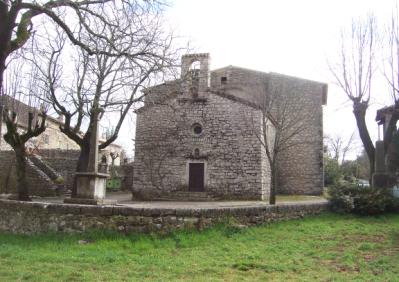 But again the clerics had been reminded of how easily they might be cought and in their fear they prayed to the Virgin Mary, promising to build a chapel in her honour if they survived the reign of terror. They went back to their hidingplace in the cave determined to be more careful in future. But as the time went by without further incidents, they started to relax their safety precedures somewhat. One day, on the 7th vendemiaire of the year 7, according to the calendar of the revolution (i.e. the 28th september 1798), the uncle went to stretch his legs in the woods surrounding the cave, when he found himself face to face with a soldier. He was immediately arrested and taken to Joyeuse. On the 2nd of octobre he was transfered to Privas for interrogation and later to Orange where he was supposed to be sentenced to death by the revolutionary tribunal. But the reign of terror came slowely to an end and one day the oncle was set free against a payment of 1400 livre (old french currency, which was replaced at the end of the 18th century by the franc) and could return to Chapias. Slowely times began to change and the priests who had been forced to hide could regain their offices. For the Sevenier that ment returning to Valgorge. But they did not forget their promise to the Virgin Mary; they organized the construction of a chapel in Chapias. The uncle died in 1814 and the same year the chapel was consecrated. The very day of the consecration mass saw the birth of a new place of pilgrimage.

The Place of Pilgrimage

Oral tradition tells us the following: The parents of Nathalie Sevenier (called le saut, the jump)a child of four or five years, dumb and disabled, had dedicated the mass of consecration to her. To the great amazement of everybody present, the child suddenly started to speak, calling out to her brother, who had escaped from the arms of their grandmother, and then she walked around the chapel. Later other similar incidents occured and Chapias developed into a place of pilgrimage attracting more and more people. In 1894, the mass commemorating the centenary of the revolution was celebrated in the presence of the bishop and 12000 pilgrims.

As the church, dedicated to Our Lady of the Deliverance of Chapias, become more and more important it was soon obvious that it was too small. Nothing remains today of the first chapel built as promised by the Seveniers, which was situated in the middle of today´s transept. It was decided to enlarge the chapel by adding a nave, which still existes today. The founder of the church, Jean Pierre Sevenier, who died the 11th of june 1841, was buried behind the old chapel, which had by that time become the chancel of the new church. In 1859 a parish was founded in Chapias. In 1869 the church was again enlarged. Aisles were added and a new choir; the old chancel was removed and a new, bigger one errected in its place so that the grave of Jean Pierre Sevenier is now situated within the church walls. Especially to be noted in the church are the bas-relief of the main altar, made in white marble, and the big painting, both depicting historical events which toke place in the vicinity. The church windows were payed for by generous donors, whose names and dates are mentioned. The statue of Our Lady of the Deliverance, situated in the niche of the choir, dates from the first chapel. The new statue next to the entrance, mesuring 1.6 meters, is the work of a sculptor from Baix, called Favre, and was commissioned in 1884. Important are also two paintings by Bourgeois from 1821; one depicting Saint Jean-Francois Regis apostle of the Vivarais, the other Saint Francois de Sales. Two more paintings of more moderate size but older represent Christ and the Virgin Mary. 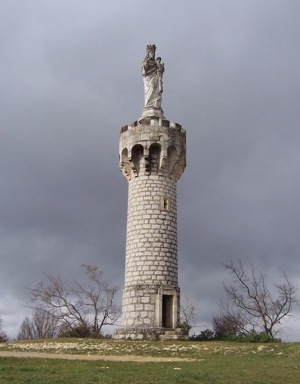 At about 400 meters from the church, stands the tower on a platform at an altitude of 252 meters. On the top of this 12 meter high tower there is a statue of the Virgin Mary with the infant Jesus on her arm. She dominates some twenty church towers all around. In good weather one can distinguish the hills of Diois, the plateau of Vercors and some peaks of the Alps. The workers who constructed the tower were called Dupland, father and son. They did also make the steps inside the tower. At the entrance an inscription is ingraved in the stone: 12 octobre 1884 NOTRE DAME DU TRES SAINT ROSAIRE PRIEZ POUR NOUS (OUR LADY OF THE VERY HOLY ROSARY PRAY FOR US)

A statue rises above the tower. The original statue was 4.7 meters high, but was struck by lighning. Both the original which was replaced in 1908 and the new statue were made in stone from Barjac, by the sculptor from Baix. Also the battlements on the tower are of the same origin. 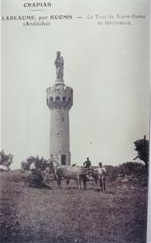 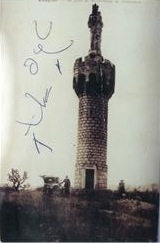 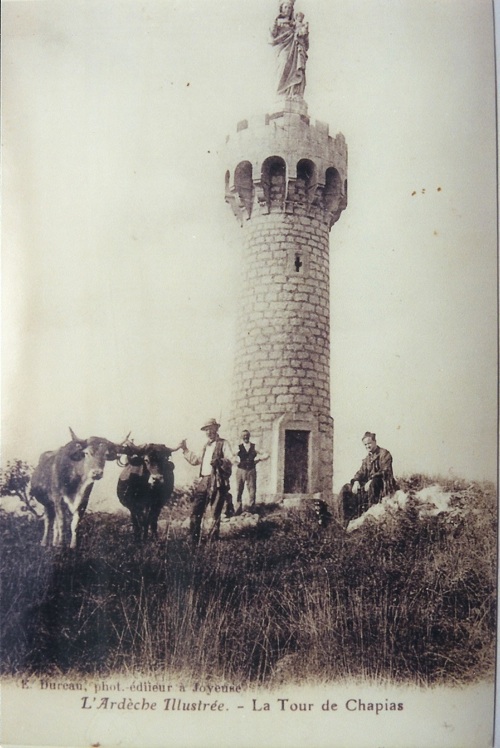 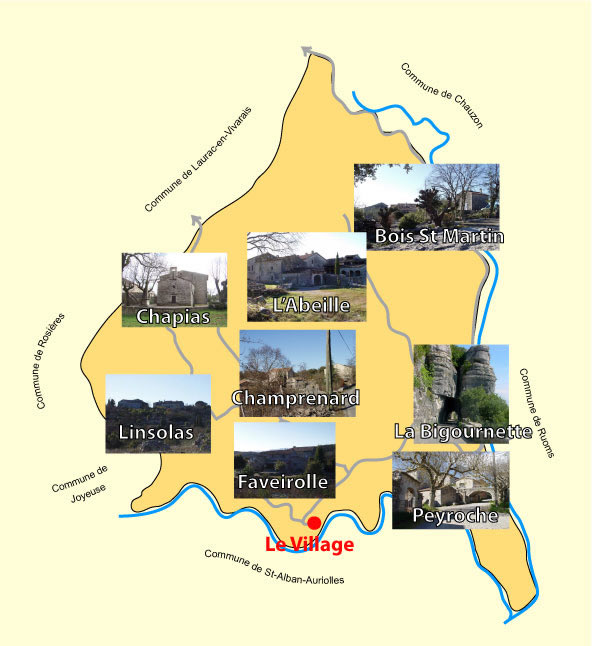